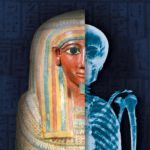 The temporary exhibition “Mummies in Bruges – Secrets of Ancient Egypt” will be inaugurated on 31 March at the Oud Sint-Jan Exhibition Centre in Bruges.  This fascinating exhibition comprises 9 human and animal mummies from Ancient Egypt that are more than 2000 years old, plus more than 200 objects (likewise from Ancient Egypt), including some that have never been shown before.  These objects and mummies belong to the collection of the Rijksmuseum van Oudheden [National Museum of Antiquities] in Leiden (Netherlands), which boasts one of the 10 most important Egyptology collections in the world.  Large information panels and videos throughout the exhibition provide explanations on the remarkable rituals of the Ancient Egyptians concerning death and their unshakable belief in the afterlife.

The exhibition is presented in 3 halls, each dedicated to a different theme.

In Hall 1 you will travel 5000 years back in time to the life of the ancient Egyptians. Timelines and maps are used to give you an idea of how this culture came into being. The focus is on life along the Nile, the hieroglyphic script and the enigmatic Egyptian pharaohs.  Magnificent archaeological objects, including statues, stelae with hieroglyphs and burial gifts tell the story of Ancient Egypt and its remarkable customs.

In Hall 2 you will be immersed in the secrets of mummification and burial. Discover the centuries old process of mummification seen through the eyes of modern technology. The mummies were scanned recently and virtually unravelled layer by layer. This process is explained with pictorial material and videos on various screens. Discover also the magnificent objects between each layer and their symbolic meaning. The exhibition shows 9 Egyptian mummies (human and animal) more than 2,000 years old, beautifully painted sarcophagi, and idols.

In Hall 3 you will discover the unshakable belief of the ancient Egyptians in the afterlife. The deceased had to undertake a journey, which was explained in the extensively illustrated books of the dead. Secret rituals and spells were intended to facilitate the journey. Pages from the books of the dead on papyrus, with the language of idols, magical amulets and scarabs are displayed in this hall.

On a quest with Dummie the Mummy

This exhibition at the Xpo Center Bruges is intended for a broad public.  For children (8 to 12) in particular, there is a quest with Dummie the Mummy, known from the eponymous children’s book series by the Dutch writer Tosca Menten, which has won several prizes in Flanders and the Netherlands.
Dummie the Mummy guides the young public through this exhibition with the help of a colouring and activity book. Crack the mummy code and learn to write your name in hieroglyphs!