From a modest family of Slovakian origin that immigrated to Pittsburgh in Pennsylvania in the 1920’s, Andy Warhol, whose full name was Andrew Warhola, was quick to display precocious artistic talent. After studying as a commercial illustrator at the Carnegie Institute of Technology in Pittsburgh, he set up in Manhattan in 1949. New York, the new capital of modern art, was an essential choice for the pursuit of his career. He soon landed a contract with “Vogue” and “Glamour”, two magazines for which he drew women’s silhouettes and fashion accessories. Andy Warhol created the blurred line technique which met with acclaim. He produced drawings with pen, inked over it and then pressed it onto another sheet of paper before the ink dried. The result obtained was an irregular and spontaneous drawing with an original hand-made feel. In the 1950’s, as an author the artist published books such as “In the Bottom of My Garden”, which were hand coloured and issued in limited series. The colourisation was carried out by friends of Warhol during evenings at the “Serendipity 3”, the café where he exposed his works. He founded Andy Warhol Enterprises Inc. and purchased a townhouse on Lexington Avenue, where he set up his workshop and moved in with his mother.

The Campbell’s Soup Cans and the first consumer goods

From 1960 onwards, Andy Warhol started to produce his first paintings, using American comic heroes such as Popeye, Dick Tracy, Superman or Mickey Mouse as inspiration. 1962 was a key year in his career. He made a brutal change in style and theme.
He drew his inspiration from the supermarkets of the Bronx, Queens and Brooklyn and used banal, everyday mass consumption goods as a model (tins of Campbell’s soup, Brillo soap, Coca-Cola bottles, etc.). In comics and newspapers, he found the stimulus to transform the images of Americans’ daily life into symbolic imageries. Reproduced many times over, they became icons of modern civilisation that could be easily recognised by all. He quickly abandoned the stamp technique, preferring screen-printing, which enabled massive and repetitive production of paintings. In so doing, Andy Warhol revised and altered the notion of the uniqueness of art works. He repeated his subjects many times but adjusted each one, distinguishing them if only by several nuances. In 1962, he exhibited his Campbell’s Soup Cans at the Ferus Gallery in Los Angeles. 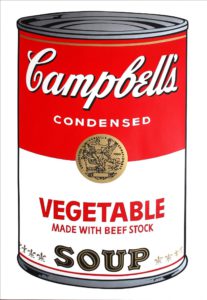 Screen-printing as an artistic technique

Screen-printing is a printing technique that enables elements to be reproduced repetitively. It allows plentiful use of ink, thus ensuring intense and long-lasting colour. Andy Warhol used this mechanical means for his works, but added his personal touch to them each time. He put this systematic reproduction into perspective by employing irregular printing through the use of deliberately clumsy registering. The artist went on to screen-printing of photographs. The original black and white snapshot merely alluded to the presence of a photograph once the colours filled in certain parts of the original picture.

From Marilyn Monroe and Mao Tse-tung to the “Superstars”

From 1972, Warhol started to move back to painting, with portraits of celebrities and famous figures such as Mick Jagger, Marilyn Monroe or Mao Tse-tung, following on from the review first published in 1969 devoted to the stars of the time. Afterwards came the series Skulls and Still Life and then, at the end of the 1970’s, series of retrospective works in which Warhol repeated his former works with a clear commercial goal. Furthermore, he tried his hand at television by producing his own programmes, in particular Andy Warhol TV and Andy Warhol’s Fifteen Minutes. In tandem with international cinema stars, Warhol also produced portraits of his “Superstars” at the Factory. They were members of the everyday entourage that accompanied him, especially at his huge parties. These “Superstars” were called Paul America, Jackie Curtis, Joe Dallesandro, Candy Darling, Jane Holzer, Billy Name, Nico, Ondine, Ingrid Superstar, International Velvet, Ultra-Violet, Viva, Chuck Wein, Holly Woodlawn … 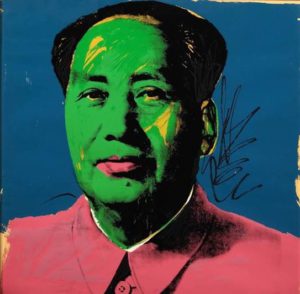 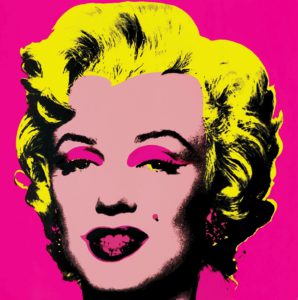 A terrible fear of death

Since the death of his father when he was only fourteen years old, Andy Warhol had a terrible fear of death. This theme is very present in his works. As early as 1954, he produced works displaying car crashes. Later, in his portrait of James Dean, it is possible to notice, in the background, the battered sports car near to a brick wall which alludes to the actor’s tragic demise. However, these images of death were exceptions up until June 1962. That year, Henry Geldzahler, the young curator of the Metropolitan Museum, showed him articles illustrating plane crashes and suggested that he focus on the tragic dimension of existence. The artist immediately adopted this theme in several series. From then on, he painted suicides, victims of botulism, car crashes, murderers wanted by the police, the widow of an assassinated President, a racist attack and the electric chair at Sing Sing prison.

The famous portrait of Marilyn Monroe is also linked to the theme of death. In July 1962, on the opening of his first exhibition at the Ferus Gallery in Los Angeles, Andy Warhol learned of Marilyn Monroe’s death. Shortly afterwards, he used a photo from the set of Niagara, the film in which she starred in 1953, as the basis to create more than fifty pictures. The smile of the late actress is repeated endlessly. The immense renown of these images most likely played a role in the star’s posthumous glory.

Warhol propagated images of death, producing several different versions and differentiating them by their format or colour. As such, his works include electric chairs in lavender or pink… The objective of Warhol was to lessen the tragic effect of these images, in spite of the brutal reality to which they alluded. 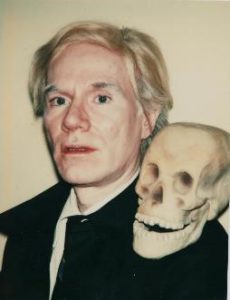 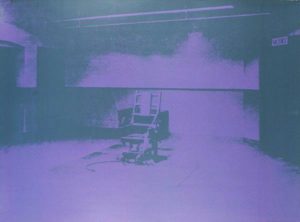